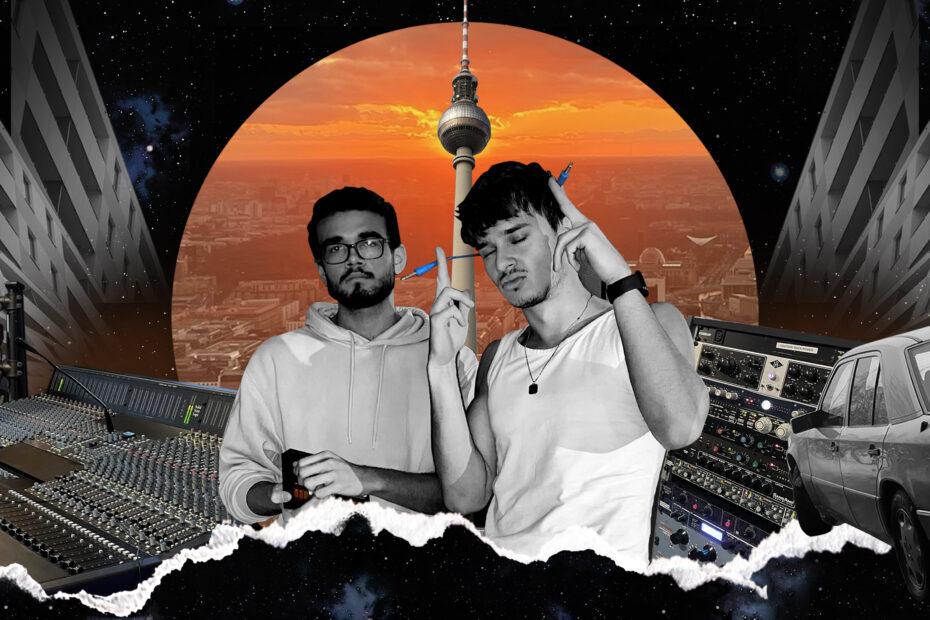 The result of this album is expressed in 12 electronic songs, created by the two Swiss producers Numa & RWBeatz.

All the music pieces of this album have been influenced by the historical atmosphere of East-Berlin, where the majority of inspiration for this album has its origin. Despite the experimentation of different musical genres contained in «Affen im Osten», all songs have something in common: A unique interplay of vintage synthesisers, drum machines and the sound of acoustic elements that bring the songs to life.

«Affen im Osten» will be released under «Numa 将来 (Shourai) Productions», an independent label founded by Numa and his friend Esteban in 2021. They established a young dynamic team consisting of talented artists and motivated business partners to cover areas such as design, marketing, filmmaking, social media, etc. Their focus stands on releasing high quality electronic music while working sustainably with all their collaborators around the world.

To ensure a high-end product with a pleasurable listening experience, Numa & RWBeatz have teamed up with Dan Meyer, an experienced mixing engineer with artistic roots in Berlin. The album is available on all major streaming platforms (e.g., Spotify, Apple Music, Dezer, Youtube,etc.).

With the track Code Red also comes the music video recorded in Berlin, which was performed by Brazilian actress Natalia Lengarth. The theme of the video deals with the so common social media addiction of these days. The fictional character goes through a life-changing process of transformation and learns to enjoy the beauty of life to the fullest.

In addition to the music video, a short documentary was released, which deals with the creation and inspiration behind the album. Additionally it gives insights about the close collaboration with Berlin Sound Engineer Dan Meyer.

“This album is for everyone who enjoys emotional dance music. We want to take advantage of the diverse music culture of Berlin as we are a part of the immigrant scene, with the goal of uniting cultures with our art, while being inspired from the city itself. Ultimately, we also want to leave our mark on the Swiss music market as rising Swiss artists.”

No comments to show.
We use cookies on our website to give you the most relevant experience by remembering your preferences and repeat visits. By clicking “Accept All”, you consent to the use of ALL the cookies. However, you may visit "Cookie Settings" to provide a controlled consent.
Cookie SettingsAccept All
Manage consent

This website uses cookies to improve your experience while you navigate through the website. Out of these, the cookies that are categorized as necessary are stored on your browser as they are essential for the working of basic functionalities of the website. We also use third-party cookies that help us analyze and understand how you use this website. These cookies will be stored in your browser only with your consent. You also have the option to opt-out of these cookies. But opting out of some of these cookies may affect your browsing experience.
Necessary Always Enabled
Necessary cookies are absolutely essential for the website to function properly. These cookies ensure basic functionalities and security features of the website, anonymously.
Functional
Functional cookies help to perform certain functionalities like sharing the content of the website on social media platforms, collect feedbacks, and other third-party features.
Performance
Performance cookies are used to understand and analyze the key performance indexes of the website which helps in delivering a better user experience for the visitors.
Analytics
Analytical cookies are used to understand how visitors interact with the website. These cookies help provide information on metrics the number of visitors, bounce rate, traffic source, etc.
Advertisement
Advertisement cookies are used to provide visitors with relevant ads and marketing campaigns. These cookies track visitors across websites and collect information to provide customized ads.
Others
Other uncategorized cookies are those that are being analyzed and have not been classified into a category as yet.
SAVE & ACCEPT